System Z: Start a New IT Career on the Most Advanced Server in the Industry

Whether you just earned a degree in Computer Sciences, or you are looking to change your career path … if you are reading this article, you are probably still searching.

Do you have an interest in any of today’s coolest technologies? Processor-assisted AI? Quantum-safe crypto? Blockchain? The highest transaction rates on the planet? Although you might not even know what a System Z (the mainframe) is, you might want to consider a career on the “big iron”. Here is why.

Today's mainframes are much smaller than the early "Big Iron" machines. [3D visual]

Mainframes are high-performance computers with large amounts of memory and processors that process billions of calculations and transactions in real time. The mainframe is critical to commercial databases, transaction servers, and applications that require high resiliency, security, and agility. Current generation mainframes are capable of handling workloads that distributed applications cannot. As an example, check out this recent paper from Futurum Research on the role the mainframe plays in reimagining financial systems.

Yes. The mainframe is a 40+ year old platform and most software running on it has been written using low-level languages such as Assembler or Cobol. So what? As much as it appears unattractive, working on the mainframe is a real and exciting opportunity. And because of open APIs, integration with modern tooling, and graphical workbenches, many mainframe roles allow you to work with the tools with which you are most familiar. 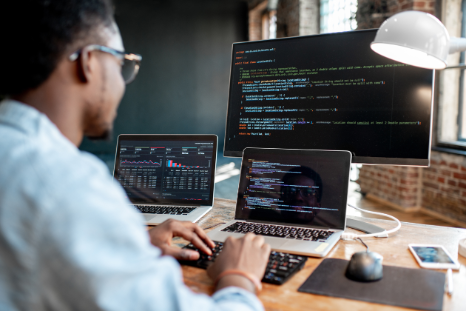 Don’t be fooled by the myriad of evangelists praising distributed servers and presenting mainframe as solely legacy. In fact, many new applications are built on mainframe, which can natively run modern languages such as Java, C, or C++. Agile projects and DevOps practices are in use for MF development.

In the past decade, a number of “new” terms have hyped the IT industry. Let’s have a look at them using the glasses of a mainframer:

Most of the world's data and processing resides in mainframes, but because many mainframe professionals (so called “Mainframers”) are close to retirement the equation is simple: IT talent with such knowledge will be a rarity in the very near future, and the biggest fortune companies will crave for them. Will “you” be one of “them”?

Lauren Valenti, Broadcom Mainframe Director of Education explains, “at Broadcom, we stood the mainframe skills gap challenge on its head and found a radical solution. If we could not find IT resources with interest and expertise in mainframe, we would make them.”

"The Mainframe is such an exciting area of IT to be in! I get to work on systems that keep the whole world running and I'm getting a great career out of it at the same time."

In a few words, it is cool to work on mainframe! If you are looking for job in in software where you can support critical data and some of the world’s largest organizations, check out this link.

Get Ahead of the Curve with AIOps: Partnering For Success